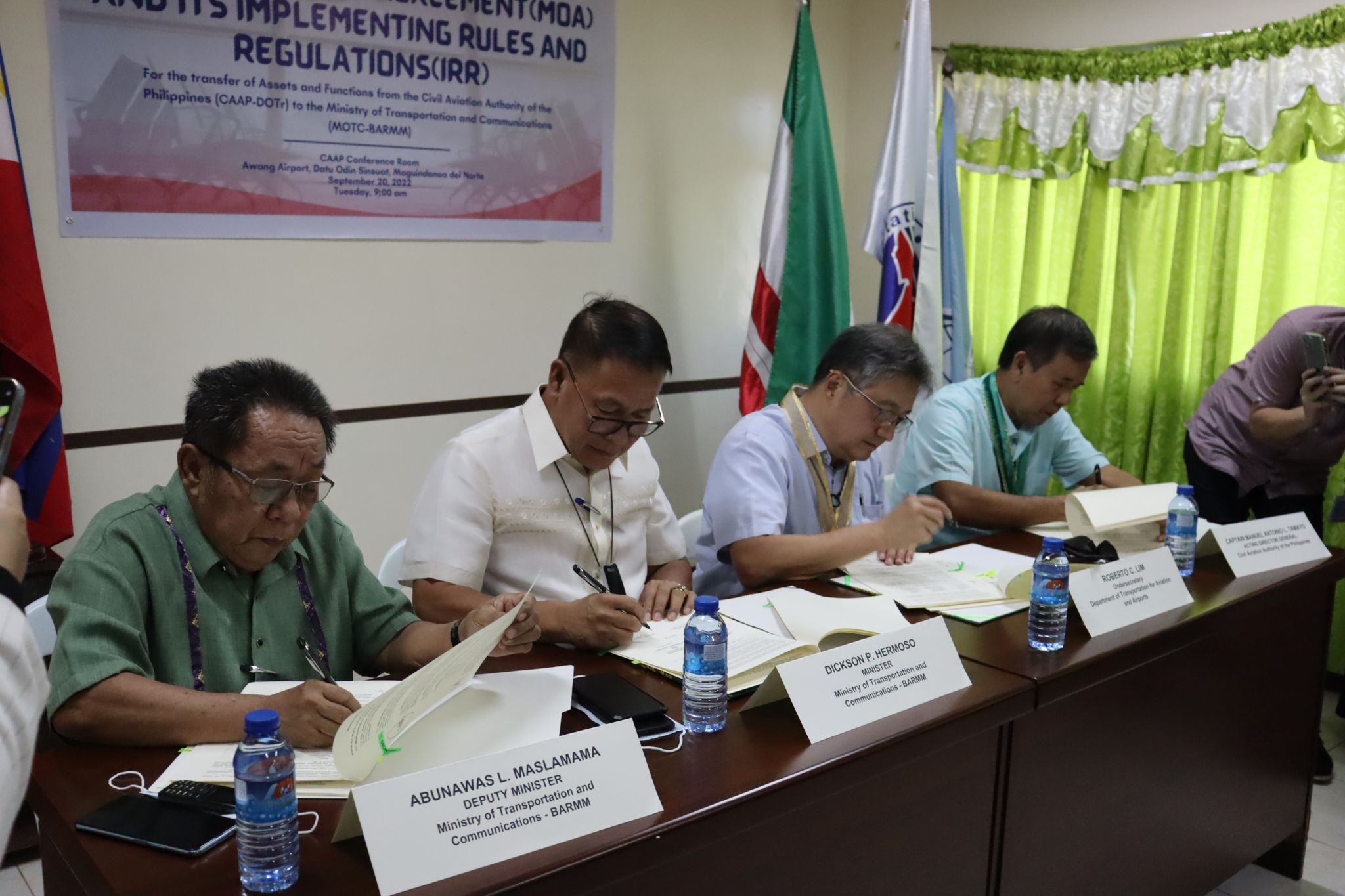 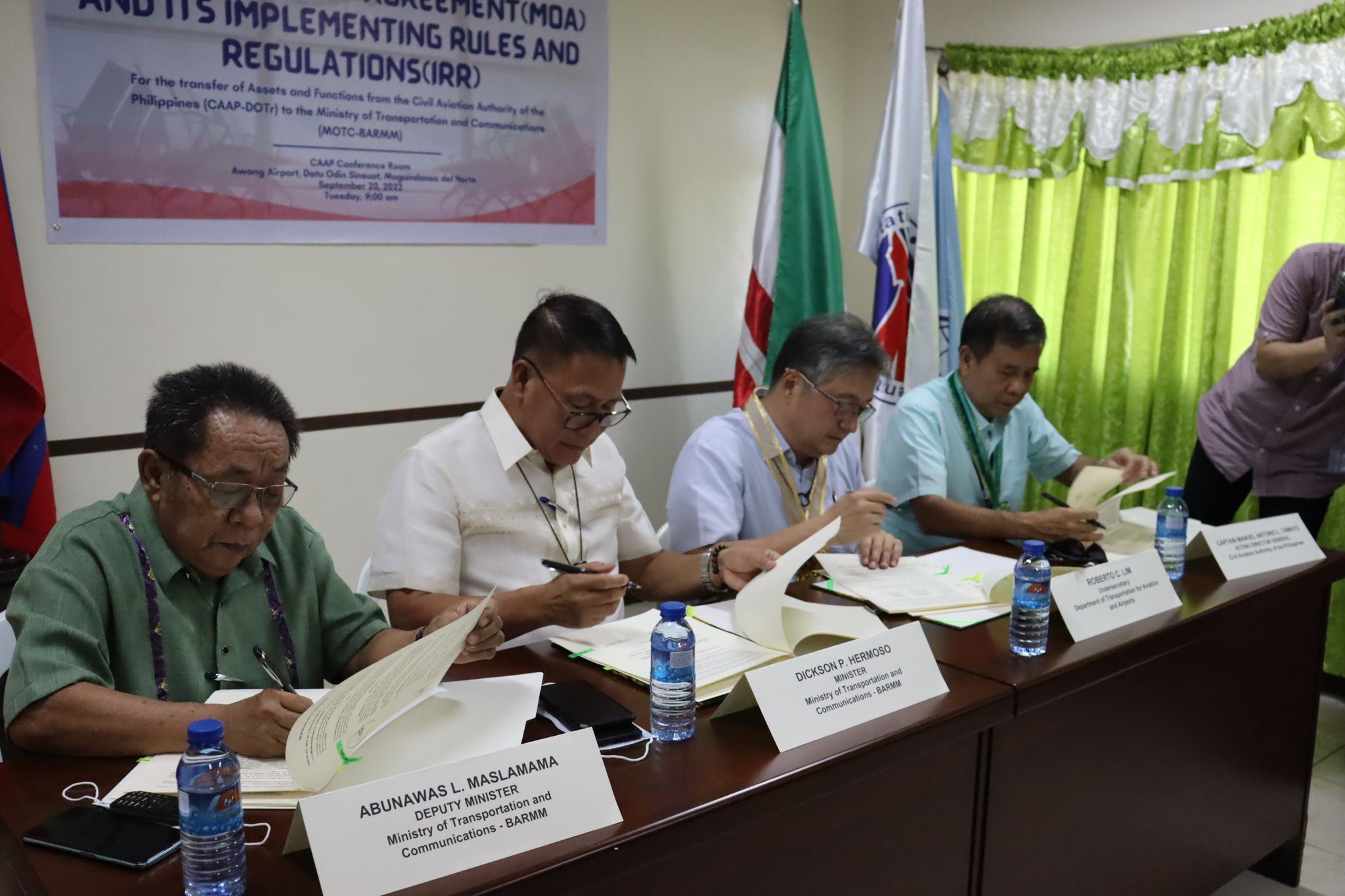 The Ministry of Transportation and Communications - Bangsamoro Airport Authority (BAA) has finally marked the last milestone through a Ceremonial signing of Memorandum of Agreement (MOA) and Its Internal Rules and Regulations (IRR) for the assumptions of its power, functions, and responsibilities under Republic Act No. 11054 cedes to the Bangsamoro Airport Authority the ownership of the properties and assets, control, management, and supervision of the landside operations at six CAAP-managed airports within the BARMM, namely: the Cotabato Airport, Sanga-Sanga Airport, Jolo Airport, Wao Airport, Mapun Airport, and Malabang Airport.

Before the MOA and the IRR signing, the Civil Aviation Authority of the Philippines (CAAP) and Bangsamoro Airport Authority have gone through a comprehensive and extensive review between the parties until both were finally agreed upon by CAAP and BAA to be approved in their entirety by the DOTr Legal Affairs Office.

During the process, inter-agency consultations with the DOTr, DOJ, Bangsamoro Attorney General’s Office, and the Office for Transportation Safety were performed to ensure compliance with both RA No. 11054 and Republic Act No. 9497 or the Civil Aviation Act of 2008.

Despite the MOA having been approved by the CAAP Board on March 22, 2022, and the IRR approved on August 18, 2022, the visit by key CAAP officials, together with the undersecretaries from the DOTr and DOJ to Cotabato Airport, is instrumental to the signing of both and helped strengthen inter-agency relations between CAAP and BAA during the transition period.

Earlier in time, President Fidel V. Ramos already issued EO 435 ordering a similar Devolution of Powers and functions from the Department of Transportation and Communications and, among others, the Air Transportation Office to the Autonomous Region in Muslim Mindanao on August 28, 1997. What may be peculiar this time was the complete devolution of the seven sectoral agencies. Six have already been granted, the BLTO, BLTFRB, CABB, BPMA, BMARINA, BTC, and the last devolution of the BAA will pave the way to take off the landside management and operation of airports in the region.

This turnover entails responsibilities to the BAA and the MOTC, and both commit to managing their function within the bounds of the law and what was stipulated in the MOA with the guidance of the DOTr and CAAP.

Moreover, the signatories were Captain Manuel Antonio L. Tamayo, Acting Director General of the Civil Aviation Authority of the Philippines, Undersecretary Roberto C. Lim of the Department of Transportation for Aviation and Airports from the national counterpart, and Minister Dickson P. Hermoso and Deputy Minister Abunawas L. Maslamama representing the BARMM.

On the final note, Minister Hermoso thanked the President of the Republic of the Philippines, Ferdinand Marcos, Jr., Secretary Bautista, and the CAAP Board for making it a reality for the MOTC and the BARMM.

“But we face the future with resolve and optimism. The leadership shown by Secretary Bautista and the goodwill you all in the DOTR and CAAP have shown to the Bangsamoro through this turnover add to that resolve and that optimism”. He said.